It’s fairly safe to say that without Sir Michael Redgrave, we may never have had the joy of watching Stephen Boyd on the movie screen. Michael Redgrave basically discovered Stephen when the later was down and out in London trying to kick start his acting career. Stephen was asked to serve as an usher during the British Academy awards in the Leicester Square Theatre. During the ceremony, Michael noticed Stephen- undoubtedly looking handsome in his usher uniform – and asked him what he was doing up there as “certainly,  he was a actor!” Stephen replied, “Yes, I am an actor”, but explained he had been unable to find work. Thanks to Michael Redgrave, Stephen was able to make some good connections with Theater Companies in London, and this eventually led to his successful movie career.  Michael Redgrave’s reputation as a bisexual always lent this story about him and Boyd to a bit of wild speculation – why was he so interested in Boyd?  I’m sure many people who hazard a guess. Whatever the case may be, Stephen truly appreciated, no doubt, Redgrave’s role in sparking his career.

Yet an actor, Michael Redgrave, did more for his career than anyone. He was working as a doorman at the Odeon Theater in London when the cinema theater across the way was having its Academy awards event and wanted someone to present the stars to Redgrave. Boyd was chosen for the job. Redgrave recognized his quality and put him in the way of getting work.

Redgrave would proudly observe Stephen’s rise to stardom. He even appeared on on the TV Program “This is Your Life” via a recorded message when the program featured Stephen as the main guest. The two actors would only appear on the big screen once together  – in the spy film “Assignment K” in 1967. It is special to see the two of them together, and to think about that first moment they met back in the early 1950’s. All we can really say is – thank you Michael Redgrave! 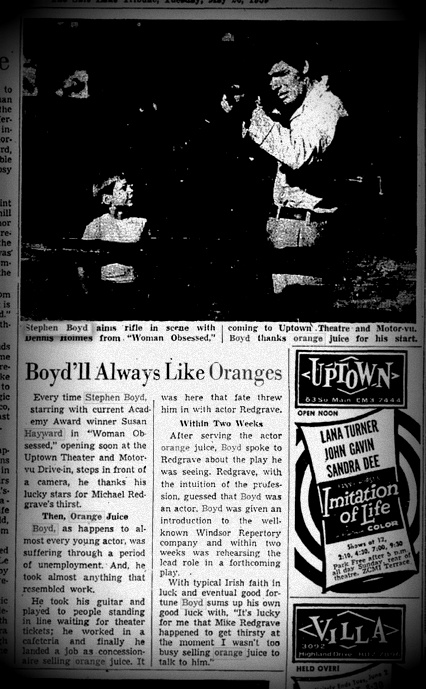