In 1963, when Stephen Boyd was first introduced to his co-star Sophia Loren, he was at once enamored and intimidated.  Sophia Loren was not only beautiful but famous, Oscar-winning, influential and physically awe-inspiring. Sophia was unusually tall for an actress- she stood at 5 foot 9, meaning she almost matched Stephen’s height. Of course she was built to be worshiped, with a very generous bust and curves to match elsewhere. Even though in person was warm and down-to-earth, she was also dark-haired and exotic, which for Stephen was the perfect poison. Like most of Sophia’s co-stars (Charlton Heston being the exception here), Stephen was smitten. Of course, being the gentleman and professional he was, it went no further than dumb-founded admiration. Sophia was married to her mentor Carlos Ponti, although Stephen does tease about this in a later interview. Sophia, at time, was also being cautious so no one would assume she and Stephen were anything more than co-stars. Apparently his affection towards Sophia was reciprocated in a friendly way. Sophia (and her husband Carlos Ponti) wanted Stephen to co-star with her in “Lady L” . They would have been great together in this! But unfortunately that part went to Paul Newman as Stephen got tied up with waiting on Anthony Mann’s “Unknown Battle”.  Stephen also hosted a Hollywood dinner party for Sophia, according to Louella Parsons,  when she came to Hollywood in 1964.

Well, good for Stephen Boyd. He’s going to give a party. Practically unheard of among Hollywood bachelors who seem to think our ‘shortage of eligible men’ famine entitles them to be forever a guest – never a host.

But Steve is making elaborate plans for his debut as a party-giver in late January. His guest of honor will be Sophia Loren, Steve’s co-star in “Fall of the Roman Empire” who will be in town then.

“I don’t have a big house,” says Steve,” so I’ll probably take over Chassen’s. But I want to do all the decorations, plus a dew surprises, myself.” (Anderson Daily Post, Louella Parsons, Jan 1, 1964)

Here are some quotes from Stephen about the Italian goddess herself, Sophia Loren.

“I was supposed to have come between Brigitte Bardot and Roger Vadim, Sophia Loren and Carlos Ponti, and to have driven Dolores Hart to the convent.”  Boyd characterizes all such reports with an expletive that translates as ‘baloney’ – (Abilene Reporter, Sep 4, 1966)

After describing the discomfort of Roman armor while kissing his co-star, Stephen said,  “Only Sophia makes it worthwhile.”  (The Bridgeport Post, February 16, 1964) https://stephenboydblog.com/2017/04/08/stephen-boyd-kissing-sophia-tough-when-youre-in-armor/

With a sudden, slightly startled smile, he answered my candid question (Gina Lollobrigida or Sophia Loren?)  “There is no comparison. I wouldn’t die exactly for Sophia, but I’d come close to it.”  (Erskine Johnson interview Stephen Boyd, Aug 7, 1963)

“Sophia would be my favorite if I had one. She is not the most attractive lady in the world at first glance but, my God, two seconds later you felt you were in a dream world. Just for her to say ‘Hello’ was enough. You just capitulated. For me she is the most beautiful person I’ve ever met.”  (Photoplay, 1976)

“I was afraid of Sophia” 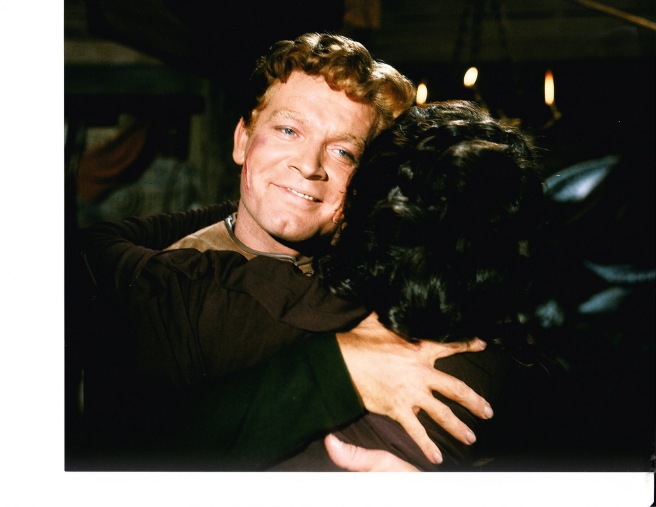 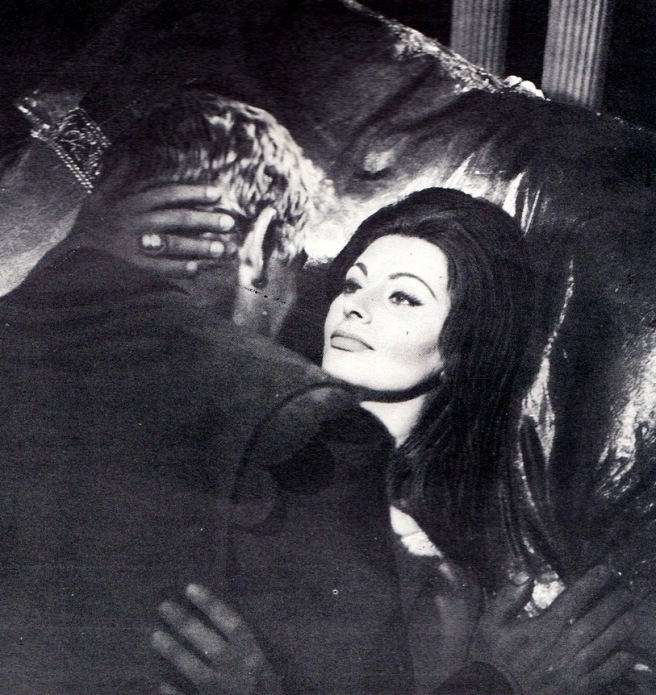 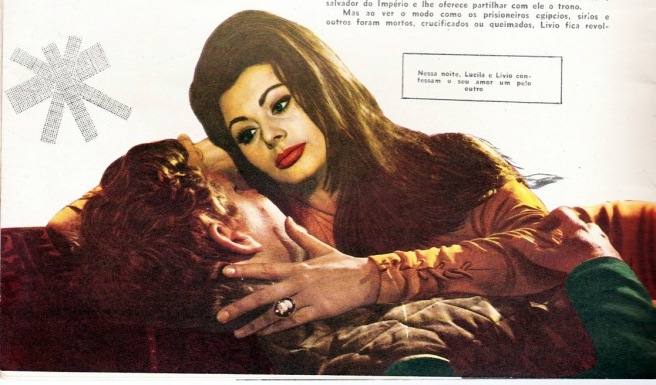 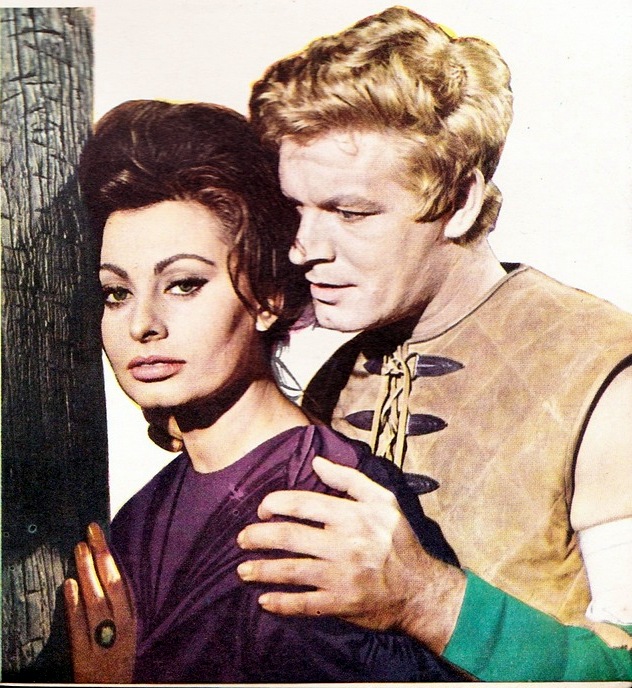 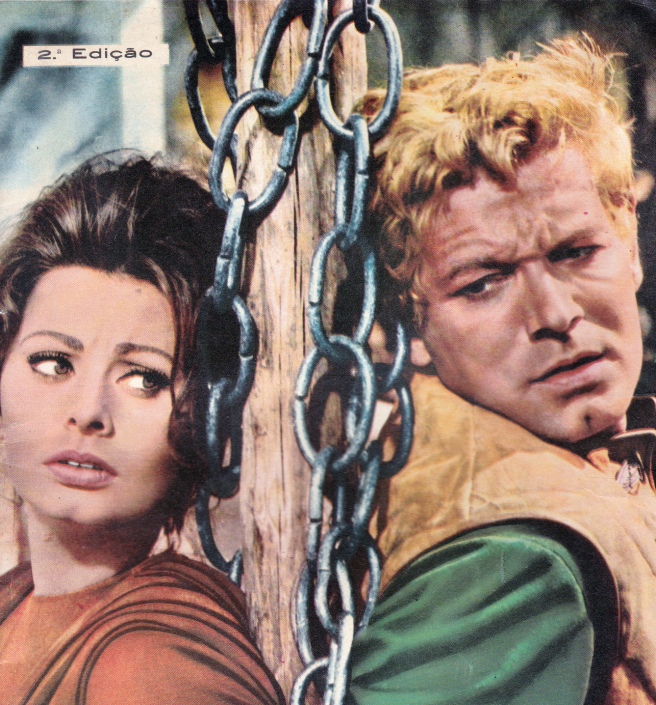 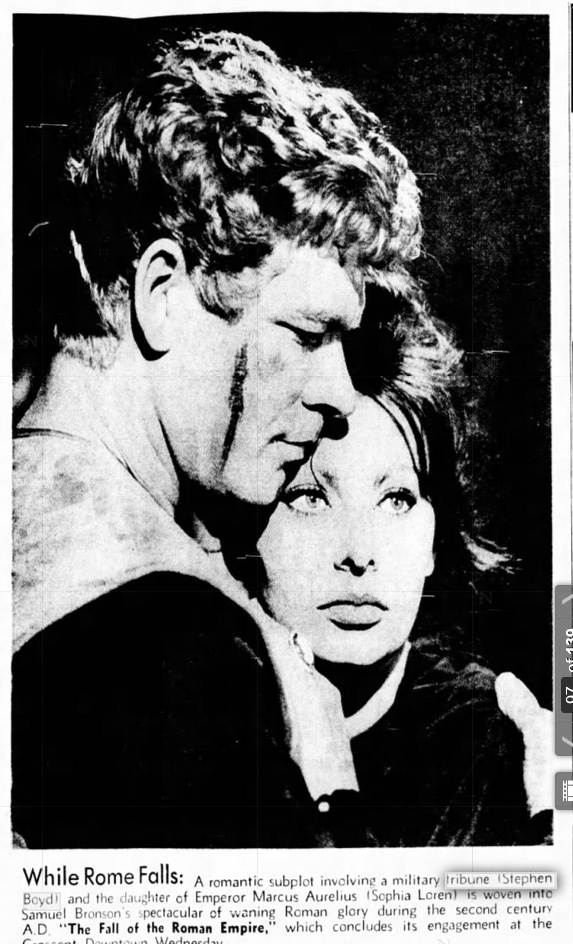