As Stephen said in a mid-1970’s interview, “I’m a completely practical actor.” So, to stay happily employed, Stephen worked overseas on many European films and earned a decent enough salary. One of the movies he made during this time was a crime caper called “A Billion For A Blonde”, or “Mil millones para una rubia”. This was filmed in 1972 in various locations around Europe, including Madrid, Geneva and Nice, according to IMDB. It was directed and written by Pedro Lazaga, who had an extensive filmography of Spanish films. The storyline concerns the escapades of Desiree Charrier (Analía Gadé), a professional jewel thief. Stephen plays Leon Urrutia, a somewhat sleazy upscale jeweler who is conned by one of her schemes and robbed. Suave French actor Jean Sorel is the policeman who is trying to track down Gadé. Espartaco Santoni plays a quirky doctor who also gets involved in these escapades. Eventually all the characters join forces and they work together to start their own jewelry heist ring.

I really like the vibe of this movie. It’s a light-hearted, sexy, nonviolent caper with a fun sense of humor. Gadé gets to wear some incredibly fashionable early 70’s outfits along with a variety of wigs and disguises. Stephen gets to show off some nice double-breasted 70’s jackets along with his very sexy mustache. All of the actors seem to be having a wonderful time making this movie. There is is a fun sense of camaraderie between them. The cast is also very international; Stephen (Ireland); Jean Sorel (France); J.L. Lopez Vazquez (Spain); Espartaco Santoni (Venezuela), also known as a Modern Casanova, counting actress Analía Gadé as one of his eight wives ; and Analía Gadé (Argentina).

The only version out there which I have found is in Spanish without subtitles, but even without understanding Spanish proficiently, you can still make out the story. It’s well worth finding! 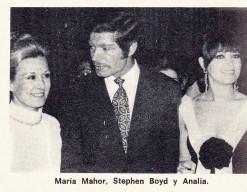 Stephen and Analía Gadé seem to be in a flirtatious mood during “Mil millones para una rubia” cast gathering. 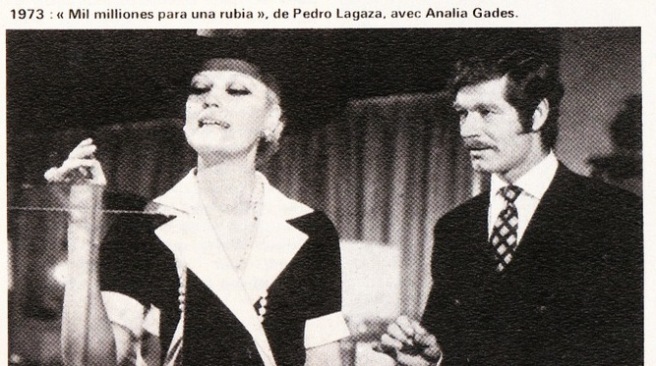 One thought on “Stephen Boyd and Analía Gadé, “A Billion for a Blonde”, 1972”