On the set of Imperial Venus in Rome

So you think movies have gone about as far as they can go. Rape, incest, young girls with old men, abortion, dope, sadism. After low-cut necklines, came no necklines. What’s left? Reluctantly, Stephen Boyd supplies the answer – nude males.

Boyd, whose first halting stab at this was with Brigitte Bardot in “The Night Heaven Fell,” goes all the way—as they say—in “Imperial Venus” with Gina Lollobrigida. In between, he’s managed to sandwich in more wholesome roles – the memorable Messala in “Ben-Hur” and the upcoming MGM release, “Billy Rose’ Jumbo.” Also, he starts work in December in Samuel Bronston’s “Fall of the Roman Empire.”

As for being nude, Boyd does not approve. In fact he considers that he’s made the same mistake twice, the second mistake being the worst, the Italian-made “Imperial Venus.” Said Boyd:

“I think it’s crude. But we were in the middle of production and I don’t think it’s professional to hold up production right in the middle of it. I knew the scene existed but from the point of view of shooting it was so simple. I’m lying in bed and I had a sheet over me. I figure when you look nude you look nude, but you don’t have to be nude. But it didn’t turn out that way.

“I haven’t seen the picture. In fact, I haven’t seen the scene. I don’t look at rushes, but those who have tell me it’s really something. Anyhow, the scene will not be shown in America. And in my opinion that makes it worse. I mean I do not believe it is necessary for me to be nude in any version, no matter where it is shown. I don’t believe this is entertainment.”

Why, then, over Boyd’s objections, was the scene filmed?

“Because,” said Boyd, “they are Italians, let’s say, and they don’t know any better. The producers are the worst bunch of amateurs I’ve ever had the misfortune to work under. The producer is amateurish rather than an amateur. He’s unreasonable.

“He thinks, I believe, that this will help sell tickets. But I wonder where he will sell them. If my memory serves me right, he can’t show it in France. I did a scene with Bardot where she was nude and I was pretty much so and they wouldn’t pass that. What Frenchman wants to look at an Irish body?

“Apart from the physical contempt for the type of operation I was subjected to, I hope I never again find it necessary to make a picture for any foreign organization that is not supported by Americans. I exclude from this the English, for the English too are professionals.

“Being a professional, one forgets there are amateurs in the field. For all I know they could be perversionists. You get involved in the picture and you get to the scene and they say, ‘All right, take your clothes off.’

“There’s all this talk about how great the foreign pictures are. But they’re all copyists. I believe all of the great talent is in Hollywood and New York. I don’t believe there’s anybody in the world that can touch them.”

From his words, it’s easy to see that Stephen Boyd had his Irish up. He is, in fact, and Irishman, the youngest of nine children. He was born in Belfast and while he had no trace of accent, he has the Irish gift for language.

And while Boyd deplored his part in “Imperial Venus,” he was quick to praise “Jumbo.” An opposite kind of entertainment. Said Boyd at the Hollywood Brown Derby.

“I honestly believe – it depends on how you view this business – that motion pictures are a form of entertainment developed for the masses. I don’t believe there is one single picture made here that doesn’t do better than pictures made in Europe – than anyplace else, for that matter. Forget the cost or anything else, the worst picture here makes at least as much as the best picture made in Europe.

“I hate like hell leaving this town. I really hate to. But at the moment pictures are being made abroad. If it looks like it’s be good entertainment, you just have to go.”

Add a personal footnote to aspiring young actors. Learn from Stephen Boyd’s experiences. Go slow, take your time and keep your pants on.

Another scene which was snipped from even the European version of Lollobrigida and Boyd in bed together.

This excellent blog post explains one of the quirky scenes in the Gina Lollobrigida/ Stephen Boyd lush Italian epic “Imperial Venus” (1962) very well – it’s based on a true story! 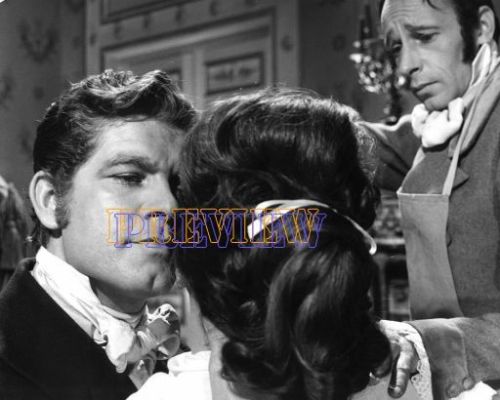 Photos from this film are extremely hard to find in the USA as it was never released here, so I am always happy to find new ones out there, generally from France or Italy. Here are the newest additions in the Movie Gallery! 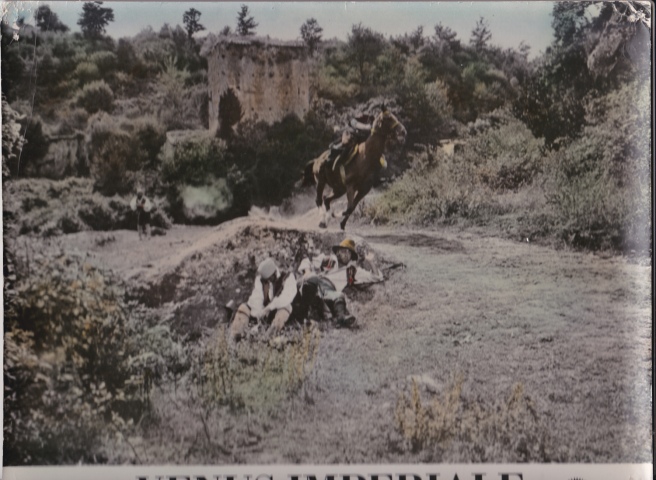 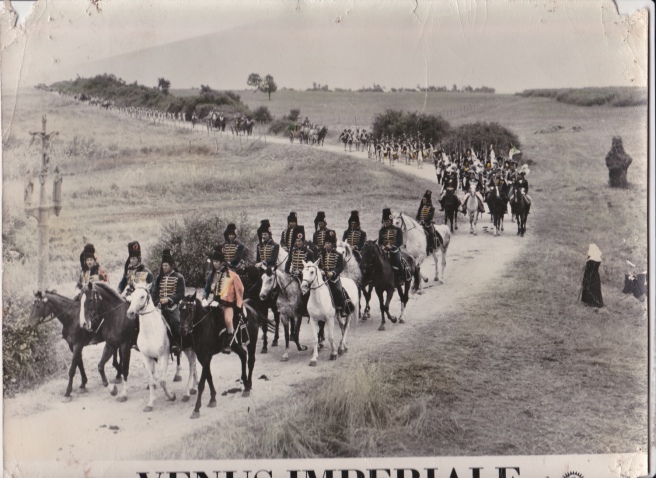 All sorts of craziness went on in Rome while Stephen was filming “Imperial Venus” with Gina Lollobrigida, although it was still not as crazy as the “Cleopatra” set which was filming around the same time there. Stephen even saved Gina’s life along with other cast members when a helicopter filming scenes dipped too low!

But for Stephen Boyd’s fast thinking, Gina Lollobrigida and five other  members of the “Imperial Venus” cast might have had their heads chopped off by the blades of a helicopter at the village of Marzaiana, 60 miles from Rome. Hovering only 45 feet above the players, the director was shooting a chase scene. A sudden downdraft caused the helicopter to drop sharply and tilt to a 40- degree angle.

Stephen yelled “Hit the dirt,” shoved Gina head over heals. I hear that the blade of the tilted helicopter came within inches. (Vidette Messenger of Porter County, August 6, 1962)

Steve’s next is “Imperial Venus”, to be filmed in Rome with Gina Lollobrigida. He reminded me that I’d introduced them one night at Producer Jerry Wald’s house: “If you recall, I talked with her that night for about five hours and found her fascinating.”

“Let’s not have ANOTHER scandal in Rome,” I said.

Stephen Boyd – who was to have played the R Burton role in Cleopatra- will have the villa next to Liz’s when he films “Imperial Venus”.  (The Daily Press, April 17, 1962)

Gina plays the role of Napoleon’s colorful sister, Pauline Bonaparte Borghese. Boyd is an officer in the French army who fall sin love with her, and he grinned: “She’s my Waterloo.”  (Fort Lauderdale News, Erskine Johnson report, August 1, 1962)

Boyd chuckled, “I’ll never forget the big moment of passion between Gina Lollobrigida and myself in ‘Imperial Venus.’ I had to grab Gina, kiss her so passionately that our knees gave out from under us, and we sank gradually and gracefully to the floor- it said in the script. And that’s the way the director insisted we play it.

“What actually happened is that I’d grab Gina and she’d swoon. But as we tried to sink to the floor our knees would bump together, we’d have to fight to keep out balance and rehearsal after rehearsal we’d wind up roaring with laughter. Censors? They never crossed our mind.” (https://wordpress.com/post/stephenboydblog.com/9476)

“In a letter from Stephen Boyd in Rome “I had top carry Gina Lollobrigida up 75 steps at the Borghese Palace six times for a scene in our movie, ‘Imperial Venus.’ Now don’t you think that’s carrying an actress in a film too far?” (The Philadephia Inquirer, Aug 1, 1962)

A fella had to draw the line somewhere. Stephen Boyd threatened to walk off “Imperial Venus” in Rome if they stick to the new scenes written calling for him to make love to Gina Lollobrigida while he is stripped down in a bath!

“That nude bathing stuff is all right for the girls,” storms Steve, “let Marilyn and Brigitte and Kim and all the others splash around to their heart’s and press agent’s content. But me? Never. They can think again. Or they’re going to be missing a boy.” (The Springfield News-Leader, August 2, 1962)  *On a side note, Stephen did complete this scene!*

They hung the “Closed” sign on Gina Lollobrigida’s set in Rome while she and Stephen Boyd did their love scenes in the room Paolina, sister of Napoleon, had constructed expressly for love – a pool surrounded by mirrors. This is the secret highspot of “Imperial Venus” which producers hope will shade “Cleopatra’s” panting passions. (Albuquerque Journal, July 28, 1962)

Every time good looking Stephen Boyd gets an  assignment to make a movie in Rome, some sort of jinx starts operating. He’s been in Italy a month languishing around waiting for Gina Lollobrigida’s “Imperial Venus” to get off the dime. It’s the usual hex- script trouble. (The Indianapolis Star, June 30, 1962)

“To avoid the traffic snarls (in Rome) when I was doing ‘Imperial Venus’ with Gina Lollobrigida,” says Steve, “I had to leave for work at 7:30 in the morning, and not come back until 11 at night.”  (Express and News San Antonio, September 2, 1962)

“Steve Boyd Flits Among the Lovelies“

So leave it to me. I came right out and asked him how they compared on his personal popularity chart.

There had been drama of a sort at Rome’s airport the day before. The two Italian film sirens were slated to arrive within 15 minutes of one another – Gina from Athens, Sophia from Madrid.

The photographers were told: “Sophia at Gate 3, Gina at Gate 22.”

One or the other could be missed between arrival times.

I was in the seat directly behind Gina on the plane from Athens. I didn’t know that the airport photographers faced a dilemma.

Not until later did I check their popularity chart. With a choice, they waited for Sophia.

In Steve Boyd’s book it was the same story.

With a sudden, slightly startled smile he answered my candid question:

“There is no comparison. I wouldn’t die exactly for Sophia, but I’d come close to it.”

We were on the set here of Samuel Bronston’s latest big epic, “The Fall of the Roman Empire.” It was a big, colorful set, build for only two weeks work. Most of the filming had been in Madrid, and more scenes would be filmed there.

The size of the film and its colossal set put no damper on the small talk always associated with a movie set, at home or abroad.

Boyd talked about “Imperial Venus,” the movie he had made with Gina. It was a farce and this he regretted. He was sticking to straight drama from now on because:

“I just can’t play farce. When I say something, I mean it.”

Director Anthony Mann was delighted about the chance to be making a historical film about Rome “with positively no clichés.” He started counting them on his fingertips – the clichés the film did not have:

The film was in its 110th shooting day but Mann was right on schedule.

“We are filming history, not making history in putting this film on the screen,” he laughed, an obvious reference to “Cleopatra.”

On sets, in Rome or in Hollywood, the small talk is the same as always. 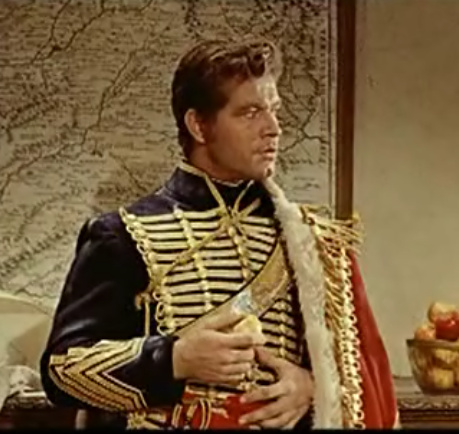 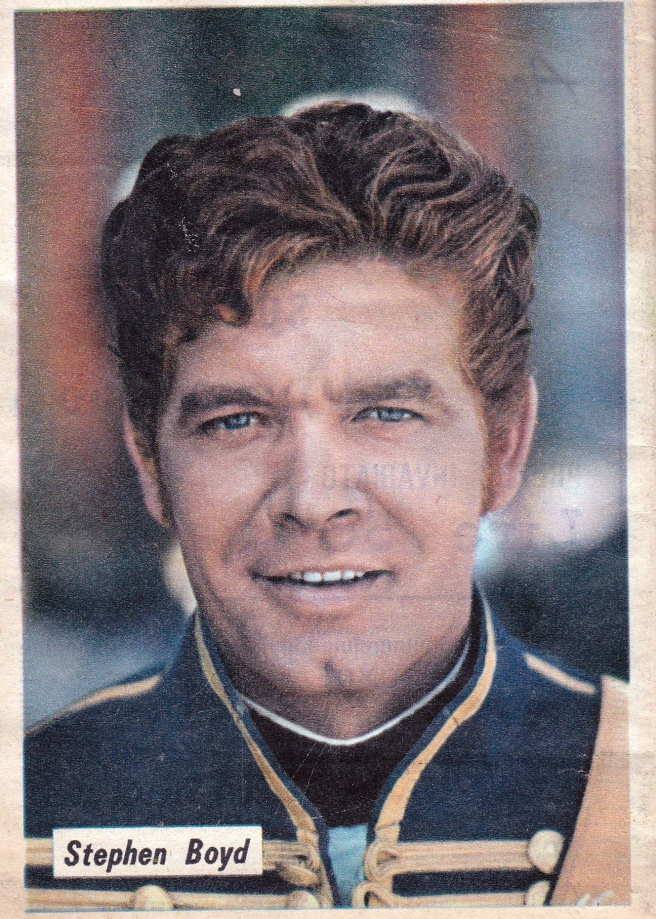